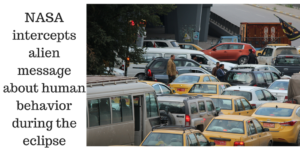 According to unofficial sources, one of the most spectacular aspects of the recent eclipse might have been the fact that aliens from another planet observed how humans responded to the rare event. Yesterday, unofficial sources revealed they had intercepted a message that appeared to come from a distant galaxy. The deciphered text reads as follows:

“The earth people had their passing event — they call it an “eclipse” — a few days ago and observations revealed something interesting about the inhabitants of planet 234987246546b (i.e. earth).

“As the planet cooled and darkened, insects were heard to chirp, animals made sounds and the earth people looked up at the sky. But then something strange happened.

“As soon as the white orb reappeared, the earth people scattered. They moved hurriedly and sought the shelter of their wheeled metal protectors.This running behavior seems odd and there have been several explanations for this behavior.

“Professor Vader of the Alpha Centuri School for Earth People Studies, who has researched earth people for the past two hundred years, has offered several explanations for this odd behavior.

“One theory is that they were scared of the returning light and rushed for protection. Another theory is that the returning light somehow stimulated their muscles and they felt compelled to run around, ” said Professor Vader. “Their brains are very odd and easily influenced. They can be impulsive and my best bet is that they were running away. They didn’t just run and seek the protection of their metal protectors, they actually fled the scene very quickly. Moreover, this was a scene that was observed almost everywhere the Passing occurred.

“This is an exciting discovery and we have tentatively  named the new behavior, Light Avoidance Under Geological Hiatus Syndrome or LAUGHS for short.”

Officials at NASA are not offering any comments at this time.

“More research is needed,” said an executive director of the agency.

Disclaimer: This story could not be independently verified so readers should take it with a small dose of sodium chloride.